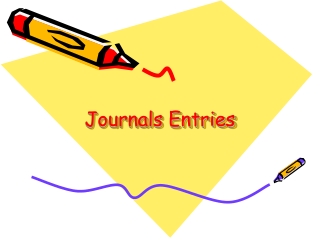 Journals Entries. August 22nd. 1 st Period: Based on your knowledge of World War II and the parties involved, what kind of impact do you believe the events of World War II had on the world? 2nd & 3rd Period: What period of time in US History stands out most to you? Accounting Entries - . an overview of basic y ear e nd and accrual e ntries. steps for closing the year. 1. most

Chartered Entries - Protection and indemnity. us$ 3,050m. international group of p and i associations general excess of

Closing Entries - . concepts and practices. closing entries. last stage in the accounting cycle is to prepare the