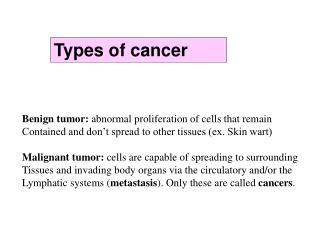 Types of cancer. Benign tumor: abnormal proliferation of cells that remain Contained and don’t spread to other tissues (ex. Skin wart) Malignant tumor: cells are capable of spreading to surrounding Tissues and invading body organs via the circulatory and/or the Abnormal Liver enzymes and/or LFTs: work-up and diagnosis - . what you need to know. differential diagnosis. population

Abnormal Psychology: Concepts of Normality - . part i. concepts of normality and abnormality. it is not any easy task to

Cells - . i. basic history. every. _______ living thing, from the tiniest bacterium to the largest whale, are made of one

Abnormal Psychology - . this is not a course about the problems of someone else. mental illness touches all of us at some