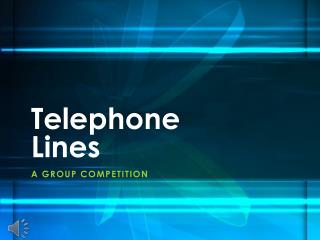 Telephone Lines. A group competition. Directions. Sit in a line with your group. (Girls 1 / Girls A / Boys 1 / Boys A)

The Nazca Lines - . importance of the nazca lines are important because they were used as paths to go from the coast to

TELEPHONE ETIQUETTE - . a matter of using courtesy and good manners. when do you practice telephone etiquette?. when

Transmission Line Theory - . introduction: in an electronic system, the delivery of power requires the connection of two

CENTRAL LINES AND ARTERIAL LINES - . sharon harvey 26/01/04. learning outcomes the student should be able to:-. identify