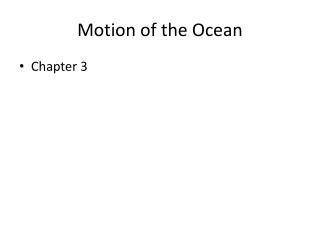 Motion of the Ocean

Motion of the Ocean. Chapter 3. Do Now. 1) Draw a diagram of an ocean profile Label the 3 layers of the ocean (with depth marked) Label the permanent thermocline in the appropriate layer 2)What is the coriolis effect?. Surface currents . Caused by the wind pushing the sea surface.

Motion of the Ocean

Ocean Structure and Motion - . tides. essential questions. what are tides? what are the different types of tides? how do

Ocean Motion - . currents. ocean currents are movements of ocean water that follow a regular pattern. there are 3

Deep Ocean Circulation - . motion in the ocean, part 2, or who wants to ride the great conveyor belt?. how does the deep

Ocean Waves - . anatomy of a wave. a wave is the motion of a form that carries energy from one place to another the form

Waves in the Ocean - . wave parameters. deep water waves. waves do not interact with the seafloor. orbits of the water

OCEAN ZONES - . zones of the water column. we are looking deep into the ocean…. so deep in fact that it takes hours to