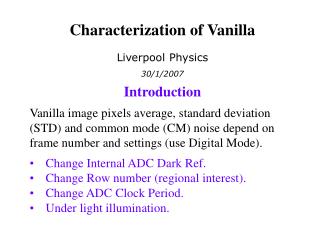 B_2: Contributions to B Physics - . introduction achievements in fy2006 2007 application summary. a. stocchi

The city of Liverpool - Introduction: brief overview. the city of liverpool. storytelling. pollination of ideas. local

Characterization of automotive paints : - . an environmental impact analysis. summary. introduction i. lca of the

Fermentation of Vanilla - . by jamal anderson. how vanilla is

Vanilla - . history of vanilla. it is the ancient totonaco indians of mexico who were the first keepers of the secrets of