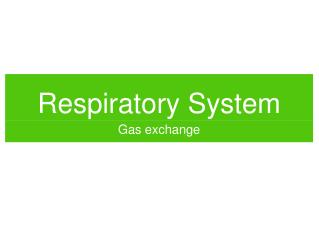 Respiratory System. Gas exchange. Warning: terminology!. “Respiration” is used several different ways: Cellular respiration is the aerobic breakdown of glucose in the mitochondria to make ATP. Respiratory systems are the organs in animals that exchange gases with the environment.

Respiratory Failure - . 1.abstracts. respiratory failure, whether acute or chronic, is a frequently faced problem and a

The Respiratory System - 22. p a r t a. the respiratory system. questions. 1. why do we breath oxygen? what is the