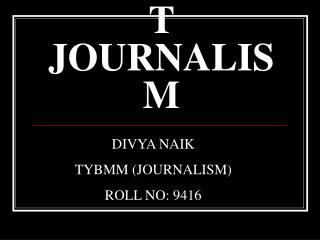 BROADCAST JOURNALISM. DIVYA NAIK TYBMM (JOURNALISM) ROLL NO: 9416. WRITING FOR BROADCAST I. OVERVIEW . OVERVIEW. Journalism is being processed at a microchip speed in this computer driven age and ‘convergence’ has become the watchword of change.

Journalism Basics - . what is journalism? define!. journalism is…. the practice of investigating and reporting events,

Introduction to Community Journalism - . mcom 404: community journalism. what constitutes a community?. community is a

CITIZEN JOURNALISM - . can citizen journalists be considered ‘journalists’? – justify your response through the use

Broadcast Journalism - . ten differences between broadcast and print. #1: be conversational. in broadcast, you write the

Welcome to Journalism! - *as you enter, check the laptop chart in the back of the room. *take your assigned laptop and

FOIA: What matters? Knowledge of the law or tactics ? - . lecture by roger vleugels dutch-based lecturer and legal