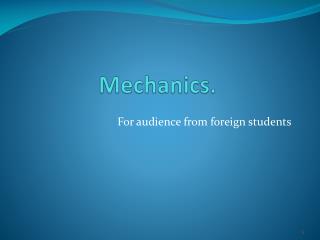 Mechanics. For audience from foreign students. Physics. The science of the simplest and the most common matter motion forms and their relative transformations. The science that studies the general properties and the laws of substance and field movements.

Part One: Mechanics - . hikers check their position using signals from gps satellites, which are 20,000 km up &amp;

Mechanics vs. Mechanical Engineers - . trey smith. the definition. mechanical engineer- someone who uses the science of

Vector Spaces for Quantum Mechanics - . phys 20602. aim of course. to introduce the idea of vector spaces and to use it

The Completeness of Quantum Mechanics - . truong pham. copenhagen interpretation(s). max born: - the square of the