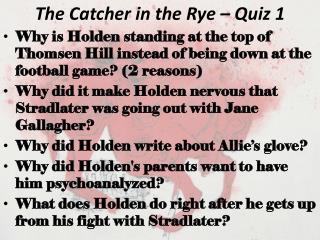 The Catcher in the Rye – Quiz 1. Why is Holden standing at the top of Thomsen Hill instead of being down at the football game? (2 reasons) Why did it make Holden nervous that Stradlater was going out with Jane Gallagher? Why did Holden write about Allie’s glove? Quiz - . what were the two most significant consequences of geographic isolation of some mangrove stand in panama? in the

Theme for English B - . short story terms. catcher in the rye. vocabulary. sat warm-up. potpourri. theme for english b.