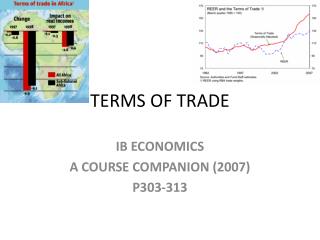 TERMS OF TRADE . IB ECONOMICS A COURSE COMPANION (2007) P303-313. TERMS OF TRADE. The Terms of Trade is one of the big problems facing many developing countries. This does not simply mean that face obstacles in the international trading system – it has a very specific meaning in context. . Terms of Trade - . november 2013. explaining the tot. the tot is the ratio of the average price of exports to the average

Terms of Trade - . pat. session 3.1. learning objectives. after this session, participants should be able to: explain the

Terms of Trade - . impacts of changes in tot for economically

Trade Terms - . broadcast/video production 1 unit 3. language of an industry. trade terms are the language of the mass

Trade Terms - . broadcast/video production 1 unit 3. language of an industry. an understanding of the technical language,

Trade Terms - . language of an industry. trade terms are the language of the mass media (print, radio, tv, film,

Terms of Trade or Incoterms - . when a purchase is made who pays what?. export packing costs inland transportation to

Terms of Trade A2 Economics - . aims and objectives. aim: understand the theory of terms of trade. objectives: describe

Key Terms – Expansion of Chinese Trade - . tai tsu ming dynasty zheng he. the fall of the mongols. chu yuan-chang would

Offer Curves and terms of trade - . the effects of shifts in a country's willingness to trade depends on the