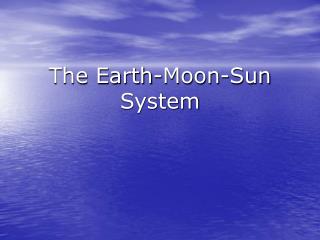 The Earth-Moon-Sun System. Time and Seasons. Measuring time on Earth Around 3000 B.C., the Babylonians devised a method of timekeeping Because their counting methods were based on 60, they divided a circle into 360 parts called degrees Moon Phases - . if you watch the moon from night to night you will notice that it seems “wax” larger from a new moon

General Astronomy - . earth and moon. the double planet. the earth-moon system is unique in this solar system in that