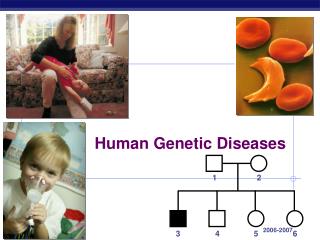 Genetic Diseases: Hemophilia - . by: chance parrish. what is hemophilia? . hemophilia is a sex-linked genetic disorder

Human Genetic Disorders - . recall: autosome - any chromosome other than the x &amp; y ( humans have 22 pairs of

Genetic Diseases - . how they are caused and why they can be beneficial. what kind of genetic disease?. can be of two