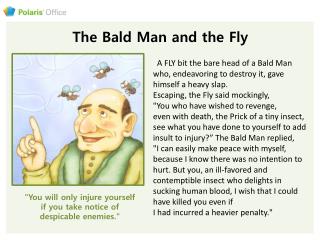 The Bald Man and the Fly

The Bald Man and the Fly - PowerPoint PPT Presentation The Bald Man and the Fly. A FLY bit the bare head of a Bald Man who, endeavoring to destroy it, gave himself a heavy slap. Escaping, the Fly said mockingly, "You who have wished to revenge,

The Bald Man and the Fly

My Animal Report - . by desmond. b a l d e a g l e. table of contents. introduction

Bald eagle - . ben james nelson . what they look like:. bald eagles are birds they have yellow beaks and white heeds and

Bald eagles and other things - . another amazing powerpoint extrordanaire by ben trumbull. brown bears live throughout

The Bald Eagle - . by: conner abel. introduction to bald eagles. did you know that… a pesticide called ddt almost

Bald Eagles - . tanner j. erickson. animal’s body. the body length of an bald eagle can get up to about 30 to 40 inches

Bald Eagle - . by reilly warble. home. only lives in north america they live in a nest lives high up in trees or

Is the Bald Eagle Endangered? - . by kaitlyn luba. when did the bald eagle live?. bald eagles still live now and are

Bald Eagle - . by: patrick. what it eats . small prey like mice rabbits and other birds like other eagles eaglets. .

Animals - . american bald eagle. the name might seem a little strange but at one time , the word ‘bald’ meant