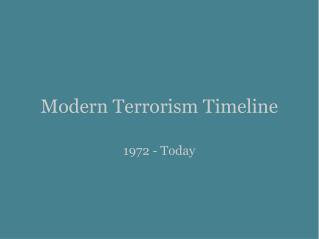 TERRORISM TIMELINE - . by nicholas hames. us embassy truck bombing-1983 a vehicle packed with many explosives was driven

Terrorism Timeline - . by haley dowdie period 3. terrorism has once again shown it is prepared deliberately to stop at

Modern Terrorism - . terrorism. the purpose of terrorism is to instill a sense of fear in a civilian

Modern Terrorism - . “the unlawful use of, or threatened use of violence to inculcate fear, intended to coerce or

Modern Terrorism &amp; the Media - . new information environment. richard holbrooke. how can a man in a cave

Terrorism in the Modern World - . vocabulary terms. terrorism. violence by non-governmental group against civilians to