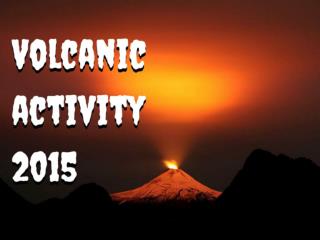 A look at volcanoes around the world that have been threatening in the past few months. From Japan to Chile, eruptions occurred in dramatic fashion, forcing many evacuations.

Volcanoes - . how and where do they form? analyze how magma forms as a result of plate motion and interaction magma and

The Relationship Between Physical Activity and Health - . physical activity any body movement resulting in a substantial

Chapter 5 Volcanoes and Other Igneous Activity - . the nature of volcanic eruptions. characteristics of a magma determine

EXTRUSIVE VOLCANIC FEATURES First Form Prepared by: Mrs. L. Greenidge - . these are formed on the earth 's surface when