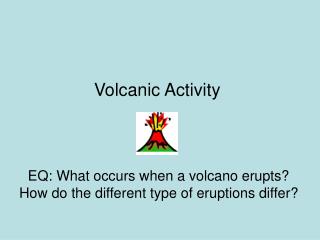 Volcanic activity 2015 - A look at volcanoes around the world that have been threatening in the past few months. from

Volcanic Activity - . volcanoes. in the last section we learned that the outer layer of the earth is called the crust. we

Volcanic Activity - . volcanoes: an opening in the earth's crust through which molten lava, ash, and gases are ejected.

Volcanic Eruptions - . eyjafjallajökull. information. it is located in iceland it area is 100 km 2 this volcano erupted

The Volcano Eruption - . by: madison . “mom, look!” lexi shouted. her mom looked over. the volcano a few blocks away

Volcanic activity sites along boundaries - . where do volcanoes occur—and why?. divergent [mor] boundaries about 75% of

Earth Science 10.2B Volcanic Eruptions - . the nature of volcanic eruptions part b. types of volcanoes:. volcanic