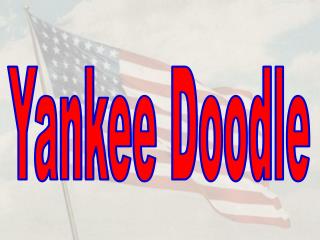 Yankee Doodle. Yankee Doodle is one of the most popular American patriotic songs. However, despite its popularity, it started out as a song that made fun of American troops. British Origins Yankee Doodle by Steven Kellogg - . father and i went down to camp,. along with captain good’in,. and there we saw the

There was Captain Washington, Upon a slapping stallion, Giving orders to his men - I guess there were a million.

The Red Pony - . by john steinbeck. the red pony. a novella of four parts or short stories, which revolve around the

The Preposition Song to the tune of “Yankee Doodle” - . with at for after up by in against beyond up through between

“Yankee Doodle” - . johnny tremain project by : i.e.l. apparently there are two?. the most common yankee doodle

The New York Yankees - . come into the dugout and learn about the best team in the mlb. . presented by: andrew ventrella