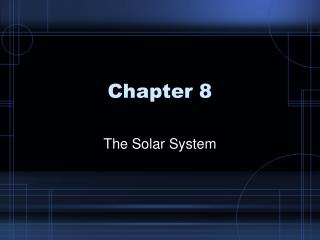 Chapter 8. The Solar System. How was it formed. The Nebular Theory Started as nebula about 5 billion years ago Composed of hydrogen and helium Nearby supernova sent shock waves through galaxy caused gases to be pulled inward supplied new elements

The Solar System - . by mrs. gazard’s class. venus was named after the roman goddess of love. slide by c.j. venus is

Solar System - . spheres and orbits. gravity causes planets to be roughly spherical to orbit in ellipses to hold onto