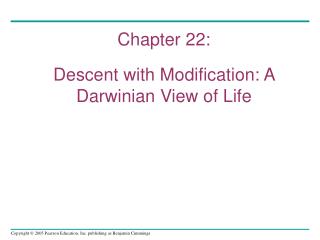 Chapter 22: Descent with Modification: A Darwinian View of Life Chapter 22: Descent with Modification: A Darwinian View of Life

Introduction to Darwinian Evolution - . chapter 18. learning objective 1. what is evolution ?. evolution. accumulation of

Cultural Anthropology - . chapter nine: kinship and descent. chapter preview. what are descent groups? what functions do

On your piece of paper - . write out your definition of evolution. explain whether you accept this idea or not, and

Ch. 22 : Descent with Modification - A Darwinian View of Life - . intro a. charles darwin published on the origins of

Chapter 10 - . kinship and descent. what we will learn. why have cultural anthropologists spent so much time studying

Chapter 10 Kinship and Descent - . chapter questions. why is kinship so important in nonstate societies? can you explain