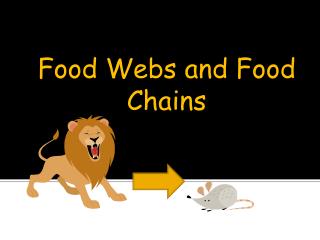 Food Webs and Food Chains. Living things depend on eachother .

FOOD CHAINS and FOOD WEBS - . food chains are designed to show the direction that energy flows from producers to top

Food Chains &amp; Energy Flow - . food chains vs. food webs. food chains show the path of food from a producer to the

Food Chains - . by: ruby hames. what is a food chain?. a food chain shows the feeding relationships between organisms in

Bell work - . what do you remember about classification , food webs and food chains. http

Food Chains &amp; Food Webs - . food chain vs. food web- what’s the difference?. a food chain is a diagram that

Food Chains and Webs - . study guide. carnivore: . animal that eats only other animals. prey. animal that is killed and

Food Chains, Food Webs, and Energy Pyramids - . chapter 13, section 13.4. this is called an energy pyramid. it shows how

Food Chains and Food Webs - . animals in barnegat bay estuary. thousands of species of plants and animals live in the

GET A JUMP ON IT! - . teaching any of these science topics?. animals classification endangered and extinct species food

Food Webs - . a food web describes the feeding relations among organisms in all or part of a community usually those