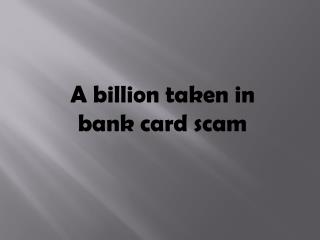 Over 200 people have been arrested in connection with a massive bank card fraud that may have bilked banks and clients out of a billion yuan ($159 million), the Xinhua News Agency reported yesterday./nThe Ministry of Public Security detained 208 people in eight provinces and municipalities. Police said they confiscated thousands of bank cards and have frozen 150 bank accounts. /nPolice in eight regions coordinated the bust on June 11, following a lengthy investigation of key suspects including a Taiwanese surnamed Wu and a South Korean surnamed Park. Introduction By: Jaden - . did you know that hyenas look like dogs but there really carnivores. there’s a lot of

What Is the Difference In Between a Bank Card and a Debit Card? - Have you ever been puzzled about the distinction in

Math in Hudson - . board of education october 10,2011. take aways. summary of math in hudson for the past two years what

What role Bank of Baroda Credit Card Eligibility plays in getting you a Credit Card? - In the times we are living in,

How to prevent risk of credit card scam - There comes a time in the whole year, when almost everyone goes for a shopping