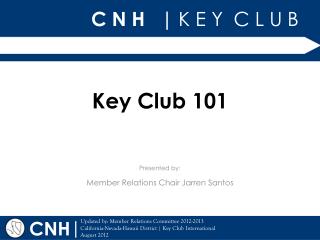 O. A. R. - O. a. r. orientation and activation for retention it’s our club so grab a paddle and help us move forward.

Club Risk Management Training - . to be completed on an annual basis. adoption of club risk management policy policy no.

The Service Club between history and present time - . “ the rotary club should not be ashamed of its early history; it

WELCOME TO YOUR TRAINING YOU AND YOUR CLUB - . you and your club. the word “lions” is an acronym. l iberty i

Club Mahindra - . subhead, if needed will appear in font size 32 and will not be bold. mahindra &amp; mahindra group.

Key Club International - . november 2, 2011. pledge . i pledge on my honor, to uphold the objects of key club

Lesson 12: Team Building - . “individual commitment to a group effort - that is what makes a team work, a company work,

ORC Rating Systems ORC International ORC Club - . why do we need rating system? to allow boats of different sizes and