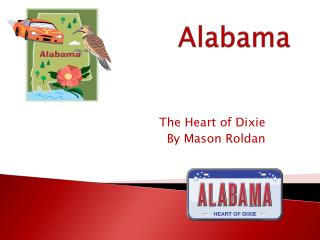 Alabama. The Heart of Dixie By Mason Roldan. Facts about Alabama. Alabama marble is the purest and whitest in the world. It has been used in buildings such as the Lincoln Memorial in Washington, D.C Want to Discover Things To Do In Alabama - We can impart an unmatched experience to you, by assuring you the best offers

Traveling the State of Alabama - . a virtual field trip. image courtesy of jim teresco. for an aerial view of our great

WHAT IS THE ALABAMA READING INITIATIVE? - . a statewide movement anchored by reading research aimed at ultimately

Discovering Alabama Chapter 2 - . discovering alabama *the new world was discovered more than once!. • the norsemen