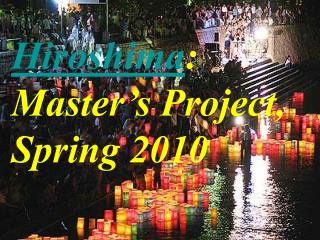 Hiroshima : Master’s Project, Spring 2010. Kazuo Matsumuro was 32 when she witnessed the Hiroshima bombing 1300 meters from the epicenter. She said that people's skin was falling off and they kept their arms in front of them like zombies to prevent the skin from sticking. AFRICA DARK HOLE OR ROUGH DIAMOND ? - . hiroshima 1945. in 1945 detroit was experiencing prosperity if you were investing

Manhattan Project - . the project that brought an end to the s econd world war. by: richie and brendan. nagasaki- before

From a TEMPUS project to a Delocalized Master - . a case from azerbaijan university of languages jala garibova baku 2013.

Hiroshima - . hiroshima with a population of more than one million, hiroshima looks just like any other up-and-coming