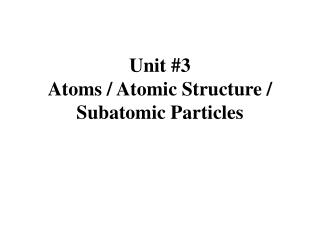 Unit #3 Atoms / Atomic Structure / Subatomic Particles. Atom-. smallest particle of an element that has the chemical and physical properties of that element. Example: anything on the periodic table. Molecule-. Control Unit CPU Logic Unit Arithmetic Unit - . how these components talk to each other? control lines and instruction

Unit Presentation – Speak Unit - . gionni skupaka. the book. speak is a book about a young girl, melinda sordino , who

Unit 3 Unit 4 - A1. unit 3 unit 4. present perfect simple. past, completed action with a result in present i have already