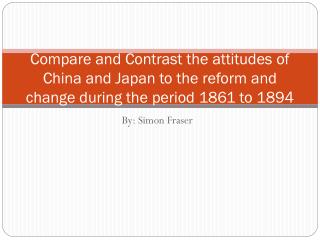 Compare and Contrast the attitudes of China and Japan to the reform and change during the period 1861 to 1894. By: Simon Fraser. Intro. Simon Fraser University Community Programs Master of Education Doctorate of Educational Leadership - . the best of both

Learning Bayes Nets Based on Conditional Dependencies - . oliver schulte department of philosophy and school of computing