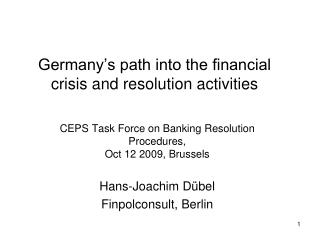 Germany’s path into the financial crisis and resolution activities

Germany’s path into the financial crisis and resolution activities

Off - Balance Sheet Activities - . off balance sheet activities. contingent assets or liabilities that impact the future

The Financial Crisis and the Future of the P/C Insurance Industry Focus on Surplus Lines - . napslo annual convention

Crisis Intervention Plan - . enable the individual to:. prevent a crisis self-manage a crisis alleviate a crisis end the