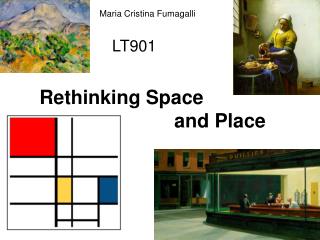 Maria Cristina Fumagalli. LT901 Rethinking Space and Place. It is not down in any map; true places never are Herman Melville, Moby Dick. What is the connection between literature (or film or theatre) and space and/or place? Why should we concern ourselves with it?. Space, place and society - . premise - the urban is a constellation of spaces, places and social practices and planning

Place in Space - . by taylah williams. stars. what is a light

My Place and Space in Canada

Our Place in Space - . meredith hughes harvard-smithsonian center for astrophysics. what is this?. how big is space?. 1

Your Place In Space - . created by dr. a. davila. the milky way galaxy is the spiral galaxy we call home, as do roughly

My Place My Space - . year 11 visual arts. unpacking the concept

Our Place in Space - . where we are. we live on earth. welcome to earf!. earth orbits the sun. the earth is in the solar

Earth’s Place in Space - . earth rotates and revolves around the sun, even though it appears as though the sun is

My Place In Space! - . by taylor. what was my focus?. research the planets and compere there sizes. mercury. mercury: