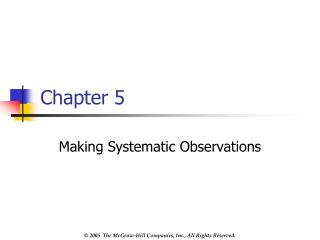 Chapter 5. Making Systematic Observations. Factors Affecting Your Choice of Variables to Manipulate or Observe. Research Tradition Your variables may be similar to those included in previous studies You may use previously used dependent variables while manipulating new independent variables