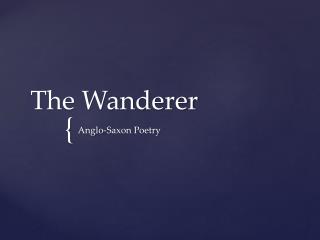 The Wanderer. Anglo-Saxon Poetry. This poem is a mournful elegy that ends with a twist.

The Romantic Period - . 1798-1832 “poetry is the spontaneous overflow of powerful feelings: it takes its origin from

Kennings - . what is a kenning?. a kenning is a compound figurative or phrase that aims to replace the noun.  it

dyssey - O. dyssey. the odyssey as told by homer translated by fagles. &quot;now i will avow that men call me

ANGLO-SAXON POETRY - . “the seafarer”, “the wife’s lament”, “the wanderer”. the exeter book. a manuscript

Notes for Anglo Saxon Poetry “The Wanderer” - . elegy. a poem in which the speaker mourns for someone or something The Seafarer - . as you read these poems about people in exile, think about what it would be like to live away from

The Seafarer - . by: aristotel logan. opening activity. in your groups, discuss times that you have been rebellious. be

Romanticism: Art - Caspar david friedrich, ‘the wanderer above the sea of fog’, 1818. romanticism: art. “one of

The Wanderer - . guided reading questions 1. how does the kenning &quot;gold-lord&quot; help you understand the

Anglo-Saxon Lyric Poetry - . “the seafarer,” “the wanderer,” and “the wife’s lament”. paganism. belief in

Anglo-Saxon Lyric Poetry - . “the seafarer” “the wanderer” “the wife’s lament” all three poems come from

The Wanderer - . translated by charles w. kennedy. the wanderer. this work is considered the most nearly perfect in form

What is a Planet? What is a Star? - . originally: “planet” = “wanderer” (greek root) refers to apparent motion

THE WANDERER - . poem from about the 5 th century ad. poetry is a powerful medium for expressing strong feelings . by