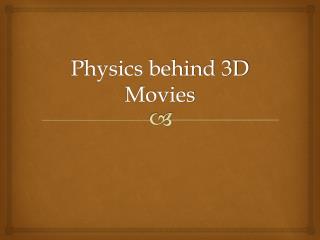 Physics behind 3D Movies. Case Study – 3D movies. With 3D viewing technology offered in cinemas, many people are fast to snap up on the tickets to 3D movies. I watched Alice in Wonderland in 3D version at Shaw Theatre recently and wondered what was the science behind the 3D glasses. The physics behind longboarding - . steven cassell 11/9/2013 physics 211. what is a longboard. explain link to

Physics Behind the Music - . down to the river to pray. take out the papers and the trash. 8 mile . knock three times.

1. The physics behind SBRT - . rt in oz roles and responsibility of the physicist achieving accuracy, precision and

The Physics Behind Automotive Engineering - . by: justin olson. introduction. l ooking at something threw new eyes