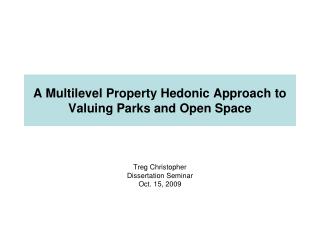 A multilevel approach to professional development - . the example of the department of human geography and planning in

Board of Appeals Parks, Recreation, Open Space Advisory Committee - . january 8, 2013. 1. who is the board of appeals?.

Open Space and Recreation - . by rebecca r., andrew g., katelynn s., and jacob c. no parks or playgrounds. the problem:

Valuing Businesses and Property after Matrimonial Breakdown - Nqla conference 25 may 2011. valuing businesses and

HEDONIC PRICING - . the hedonic pricing method is used to estimate economic values for ecosystem or environmental