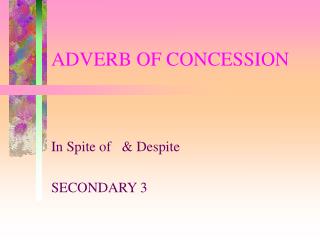 Concession - . assertion assertion. although some people think that…. the truth actually is…. b ecause. and because.

CLAUSES OF CONCESSION - . or contrast. analize these sentences. which kind of sentence is each one of them?. he had a

Definition of Adverb - . adverbs are words that modify the following: a verb (he drove slowly . — how did he drive?) an

Adverb Notes - Definition an adverb is a word that modifies a verb, an adjective, or another adverb adverbs answer the

The ADVERB - . by uzma minhaj. what are adverbs?. an adverb is a word which modifies the meaning of a verb, an adjective

ADVERB TEST - . mrs. phillips language arts. lazily, the dog got up and walked to his water bowl. and. which is the

Adverb Clause - . a subordinate clause that describes the verb in the main clause – begins with a subordinating

Concession Instructions - . a hugo lions representative will deliver the cash to you at the start of your shift you will