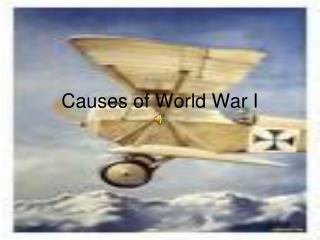 Causes of World War I Causes of World War I. 4 Causes of WWI. M ilitarism A lliance System I mperialism N ationalism MAIN. Militarism. Most of the countries involved in WWI began to strengthen their arsenals. The build up of weaponry gives countries more machinery and technology in case they are threatened.

Causes of World War I