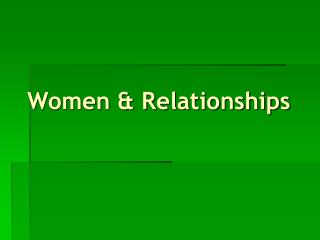 Women & Relationships. Friendship. Friendship. Women have often been portrayed as incapable of true friendship However, many female friendships are deep, intimate, and enduring Females emphasize self-disclosure, emotional closeness, and empathy Peer Interactions, Relationships and Groups - . susan brockmeyer november 4, 2004 (use of these slides requires the

Chapter 3: Examining Relationships - . intro:. this section is going to focus on relationships among several variables