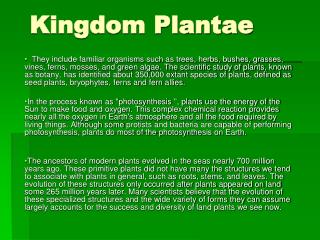 Kingdom Plantae. They include familiar organisms such as trees, herbs, bushes, grasses, vines, ferns, mosses, and green algae. The scientific study of plants, known as botany, has identified about 350,000 extant species of plants, defined as seed plants, bryophytes, ferns and fern allies.

The Animal Kingdom: The Deuterostomes - . chapter 31. learning objective 1. what are the shared derived characters of

Kingdom Fungi - . characteristics. fungi are not plants nonphotosynthetic eukaryotes nonmotile most are saprobes (live on

Warm Up - . friday 4/4/14 1)which body system helps you fight off viruses such as the flu? . objectives. i describe

Kingdom Monera - . characteristics. most numerous and widespread organisms on earth. includes the smallest and simplest

The Six Kingdoms - . use the words in red to fill in the blanks!. archaebacteria eubacteria protista fungi plantae

Kingdom Fungi - . characteristics. fungi are not plants nonphotosynthetic eukaryotes nonmotile most are saprobes (live on

UMW Softball - . coaches getting the field ready. competition. scouting the. hangin' out. at the airport. ready for

The Kingdom Plantae - . gaiser life science. know. what do you know about plants as a group?. “i don’t know

Kingdom Plantae - . introduction to plants. what is a plant?. plants: are multicellular eukaryotes have cell walls made

Kingdom Plantae - . vascular plants – have vascular tissue – a system of interconnected tubes and vessels to