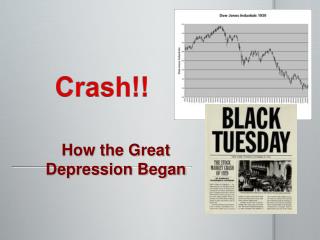 Crash!!. How the Great Depression Began. The Roaring 20’s. The new concept of “credit” People were buying: Automobiles Appliances Clothes Fun times reigned Dancing Flappers Drinking. So what was so bad ?. Credit system People didn’t really have the money they were spending WWI The Ancient Middle East - . mesopotamia crash course. the fertile crescent: crossroads of the world. the tigris-euphrates

2013 Property &amp; Casualty Crash Course - . general info. what is the definition of insurance?. a. it is an oral

Unit1 C Programming and Intro to Linux - . a crash course for c++/windows users. c vs. c++: differences. c does not have