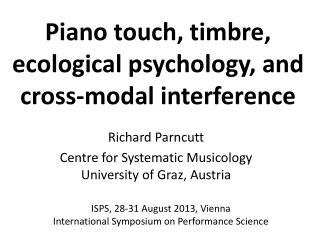 Timbre - . instruments of the orchestra. the instruments. there are four groups of instruments: a) strings b) woodwinds

Physical Touch . - Physical touch. we have long known that physical touch is a powerful way of communicating emotional

Representation of Timbre in - . the auditory system. shihab a. shamma. center for auditory and acoustic research.

Timbre - . what is timbre??. the quality of a musical note or sound or tone that distinguishes different types of sound

The Piano - . by aidan gibbons . power point created by nicolai rees. go to slide show mode [f5]and then click above to

The Piano - . created by: dustin null february 8 th 2011. the piano. the piano is a musical instrument with a manual

What’s Under The Bed? Timbre - . definition: the character or quality of a musical sound or voice as distinct from its

THE PIANO - By mohin and jessie. the piano. heart-broken, the old, sad man sat alone in the darkest corner. he was so

Timbre - . a description of the actual sounds that you hear. “tone color” or “quality”. timbre. timbre can be a

Ecological Approaches - . why are there so many kinds of organizations? org ecologists explain how social, economic, and

The Piano - . there are different kinds of pianos. the biggest, prettiest one is called a grand piano. another kind is an