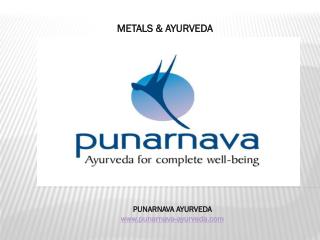 The usage of metals in Ayurveda treatments and therapies

AYURVEDA - . also known as: ayurvedic medicine. do you have any experience with ayurveda?. what does ayurveda mean?. the

Evidence Based Practice - . introduction for residents. judith riley, od. drfoureyes@aol.com 918 527 7210. the roots of

Transition Metals and Coordination Chemistry - . 21.1 the transition metals: a survey 21.2 the first-row transition

Chapter 11 Treatment for Psychological Disorders - What are the therapies for psychological disorders? . the two broad