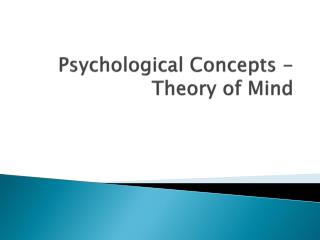 The phrase theory of mind can be used in several ways. There are the specific theories of mind attributable to individuals. Concepts of Systems Theory - . contemplative questions. what is systems thinking? why do ‘systems thinkers’ get

Concepts of Systems Theory - . contemplative questions. what is systems thinking? why do ‘systems thinkers’ get

Behaviourism Major Psychological Theory - . basic idea of behaviourism. we learn how to behave based on how society and

Concepts of Game Theory I - . what are multi-agent systems?. organisational relationship. interaction. agent. spheres of

Concepts of Game Theory II - . the prisioner’s reasoning…. put yourself in the place of prisoner i (or j )… reason

Concepts and Theory - . information can be transmitted by varying some physical property of a signal. voltage current

Theory and Concepts - . theory rests on a set of assumptions that forms the foundation for a series of l