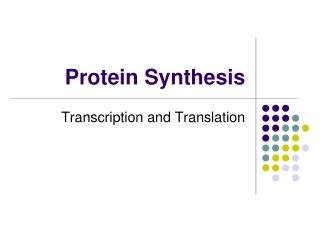 Protein Synthesis. Transcription and Translation. The Central Dogma. The information encoded with the DNA nucleotide sequence of a double helix is transferred to a mRNA molecule. The mRNA molecule travels out of the nucleus and attaches to a ribosome

Genetics - . what dna is telling us!. unit goals. the student will investigate and understand common mechanisms of

Protein Synthesis - . how proteins are produced. an analogy of gene expression. transcribe (copy) a set of ingredients