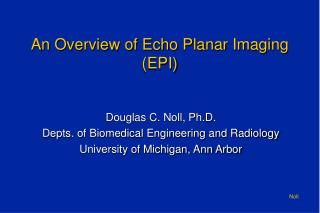 An overview of EPI in Z ambia - . kevin m zimba. who intiative 1974 coctail of vaccines 1984 aim to immunise all children

Pulse Echo Imaging Systems - . now we are going to learn what must happen to the echoes returning to the transducer to

An Overview of the Hurricane Imaging Radiometer (HIRAD)