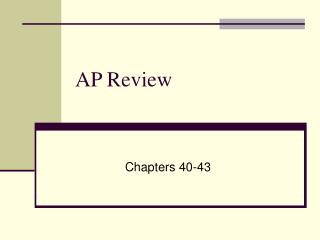 AP Review. Chapters 40-43. Fast Facts. Tissues : groups of cells with a common structure and function - epithelial, connective, nervous, and muscle Epithelial tissue: - covers the outside of the body and lines the organs within the body - cells are held together by tight junctions. AP Review - . which of the following four statements describe isotopes? atoms of an element having different numbers of

AP Review - . chapters 13-15. fast facts. heredity : the transition of traits from one generation to the next along

AP Review - . ap review. by: chelsea mellor period 5. iv. question 1. which of the following statements about the

AP Review - . do now. why are you in the ap class? or why go to school in general? give 2-3 reasons. how will you achieve

AP Review - . …from the civil war key information you must know. western expansion 1860-1895. homestead act and the

AP Review! - . january 13 - 17. what fourteenth century practice is depicted above? what was it thought to do? and what