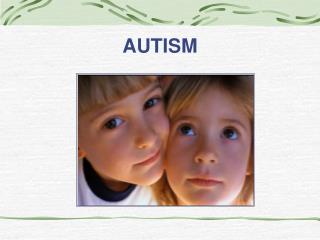 The Use of Technology To Promote Independence and Social Acceptance in Adolescences with Autism - . p reparing a

AUTISM CYMRU - . by special arrangement with joe calzaghe. paul shattock university of sunderland. the use of medications

Autism Spectrum Disorder and Visual Impairment (ASDVI) - . disclaimer. the information in this power point is not

Natural Supports for People with Autism Spectrum Disorder - . griffin- hammis module participants. does anyone work with

Head to Toe: TOOLS! to Use with Students on the Autism Spectrum - . heather knox, lisw sociallearningabq@yahoo.com

LOGICALLY ILLOGICAL Information and Insight into Autism - . ros blackburn. ‘i can only know what i am told or taught or

Pediatric Hypothyroidism: Implications for Down Syndrome and Autism - . down syndrome treatment center of oregon dr.