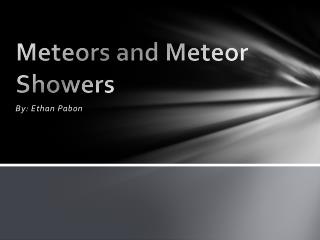 Meteors and Meteor Showers. By: Ethan P abon. What are Meteors?. Meteor showers - . by landen hacker mrs.lower may 14;2013. who discovered the kuip er belt?. the answer to that

Meteors and Meteorites - . “meteoroids” - still in space…. “shooting stars”. size of a pea velocities of 10’s

METEORS!! - . by: gage meaney josh rose. table of contents. meteors. a meteor is a small particle of space debris from

Meteors! - . meteoron – greek for thing in the sky meteor - objects that fall through and burn up in the earth’s

Meteors And Meteorites - . target 7. explain the difference between a meteor and meteorite. what is a meteor?. a meteor

Comets, Asteroids, and Meteors - . the solar system’s other stuff. comets. chunks of ice and dust orbits are very long,