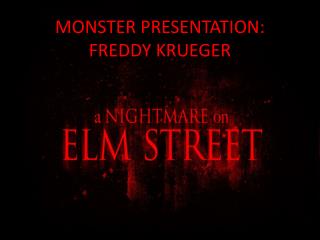 MONSTER PRESENTATION: FREDDY KRUEGER. “Dream is the personalized myth, myth the depersonalized dream; both myth and dream are symbolic in the same general way of the dynamics of the psyche.” –Joseph Campbell. “A Nightmare on Elm Street”.

Alpha monster advanced reviews - If you want to get chiseled body with lean muscle mass in bulk, then opt for alpha The Car Monster - . a poem using personification. the car monster. it lives in a place with no windows darkness and junk

Using language - . a story about a frog. hello, everyone. my name is freddy. when freddy was young, he was a little

12 little Preschoolers and the Little purple Monster - . hre pre-k. there once lived a little purple monster. he wanted

By Paul Maestas - Freddy the friendliest mouse. by paul maestas. this is freddy. he is a very friendly mouse. his

Freddy and the Field Day Dilemma - . by: the awesome student teachers . this is freddy and he is 12 years old. freddy is

Monsters - . what colour is the monster? does he look scary?. is this monster a girl or a boy?. is this a real monster?.

My Monster - . this is my monster he has . eyes. as dark as pools of black ink. teeth. as sharp as razor blades. skin. as