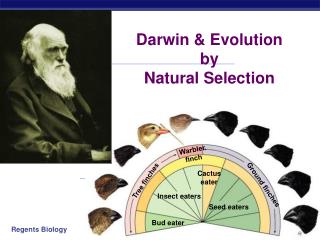 Evolution (Darwin and Darwinism) - . the history of an idea darwin’s theory a darwinian view of life human evolution.

Darwin’s Theory - . chapter 15 section 3. darwin presents his case. the specimens darwin brought back had the

Chapter 15 – Darwin’s Theory of Evolution - . charles darwin. made observations and collected evidence that led him

Charles Darwin and Natural Selection - . objectives: to explain darwin’s theories of evolution by natural selection to

Darwin - . how are these iguanas similar? how are they different? do you think they are related? (do they share a common

DARWIN - . darwin: the early years. charles darwin was born to an upper class family in 1806 and was the 5 th of 6

Mr. Charles Darwin - . a most brilliant man. charles robert darwin . born to a wealthy family in shrewsbury, england on