UNIT ONE: POETRY Learning Goals: I can determine and understand the meanings of poems - PowerPoint PPT Presentation 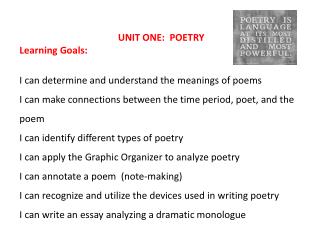 UNIT ONE: POETRY Learning Goals: I can determine and understand the meanings of poems

UNIT ONE: POETRY Learning Goals: I can determine and understand the meanings of poems I can make connections between the time period, poet, and the poem I can identify different types of poetry I can apply the Graphic Organizer to analyze poetry I can annotate a poem (note-making)

UNIT ONE: POETRY Learning Goals: I can determine and understand the meanings of poems

English 2 PreAP Poetry Unit - . objectives: the students will be able to…. …appreciate poetry as a genre …recognize

Analyzing Poetry - . diction imagery syntax. 1624 emily dickinson. apparently with no surprise to any happy flower, the

Poetry - . learning objective. building a basic understanding and appreciation of poetry and how to apply it to the art

Poetry… Do I Dare? - . i ask them to take a poem/and hold it up to the light/ like a color slide… but all they want

Understanding Poetry - . prose:. writing that has lines stretching form one end of the page to the other sentences are

Poetry Review - . english i - parsons. definitions. alliteration: repetition of consonant sounds at the beginning of