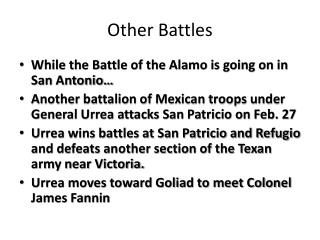 Other Battles. While the Battle of the Alamo is going on in San Antonio… Another battalion of Mexican troops under General Urrea attacks San Patricio on Feb. 27 Urrea wins battles at San Patricio and Refugio and defeats another section of the Texan army near Victoria.

Battles Powerpoint - . battle of stalingrad. germans running out of oil, so hitler changed his tactics to 1. get oil

World War 1 - . by: haille madill 3b. german involvement . cause of the

Battle of the Atlantic - . despite declaring war first on japan, the us concentrated on europe first. key to winning the

The Persian Wars - . wars between greeks and persians in 5 th century bc roughly from 492 – 448 bc two main invasions

Bathing Without A Battle - . why?. people that are stroke patients often have difficulty remembering “good” hygiene,