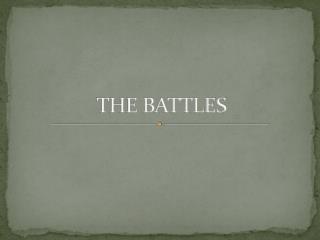 THE BATTLES. The Progress of War: 1861-1865. Theatres of War. Two major areas of battle on the land: The Eastern Theatre East of the Appalachians, particularly the region surrounding the two capital cities: Washington D.C. and Richmond, Virginia. The Western Theatre

The First BATTLES - . the battle of liege,

Battles - . by drew bradley &amp; caleb hurd. the battle of lexington and

Battles of the Revolution - . vocabulary. mercenary. a soldier who is paid to fight for a foreign country. about 18,000

Battles of the Revolution - . battle of bunker hill. 1775 the british drive the patriots from hill overlooking boston,

14.2 The Early Battles - . i. holding the line against japan. d ays after the attack at pearl harbor, the japanese sent

Battles of the revolution - . help from the french. the americans kept asking france to help france kept saying no! they

The battles of Saratoga - . how did the americans ultimately win at saratoga? how were the battles of saratoga

Battles of the WW2 - . blitzkrieg. who?. germany – “lightning war”. fast and open style of warfare through enemy

WWII – The Battles Begin - . between 1939 and 1941, germany is able to take over many european countries using a

Battles of the Revolution - . battle of bunker hill “don’t shoot until you see the whites of their eyes.” -israel

The Battles of Saratoga - . by: gabby, k ylee, l ucas, and nathan. the 2 battles of s aratoga. first battle september 19,

The Battles for the Pacific - . japanese advances. within six months after pearl harbor, japan dwarfed the german empire

THE BATTLES OF CHESS - . by: lan anh foster. chapter 1: the beginning. click next for the adventure to continue!.

The America Revolution The Battles - . revolutionary armies – the british. british army most powerful in world also

Important Battles - . vicksburg gettysburg. siege at vicksburg. the confederates were in high spirits because of